We finally got the engines installed, the boom attachment (gooseneck) fixed and the steering seals replaced and we’re off to the island of Moorea, an entire 12 miles away!

Everything seemed fine (but standby – stuff yet occurs).

We motored across the “Sea of the Moon” as the channel is known in Polynesian – the body of water between Tahiti and Moorea.

We anchored in an old familiar spot and would do an island drive, self guided tour the next day before heading the 80 miles to the island of Huahine – The island of the women in Polynesian.

The island of Moorea in the background. A local “V6 Crew” in their canoe with Tahiti’s reef at the main harbor exit behind them.
Canning is the national sport and a complete lifestyle for many Polynesians. This is the entrance to the harbor at Papeete with the notice to call Port Control as the airport runway is just off to our right. You need permission to pass in either direction. The “Aranui 5”, one of the local inter island cargo and tour ships is in the back ground.
This is one of many high speed catamaran ferries that go between Tahiti and Moorea daily. The trip can be as little as 25 minutes each way. Many locals actually commute.
This is an important memory of my time in Tahiti in 1977. This is the very spot, right behind the navigational mark, that my 32 foot ketch, “Triad II” went aground. That’s another story for another time. Fortunately, we were towed off the reef the next morning and the conditions were extremely benign that fateful June evening in 1977.
Moorea and the “Sea of the Moon” as seen from Tahiti. The trip to the northern anchorages is 12 miles.
Arriving at Moorea, you can see the inter island “puddle jumper” who left Papeete 10 minutes before hand, about to land on the outer motu runway. 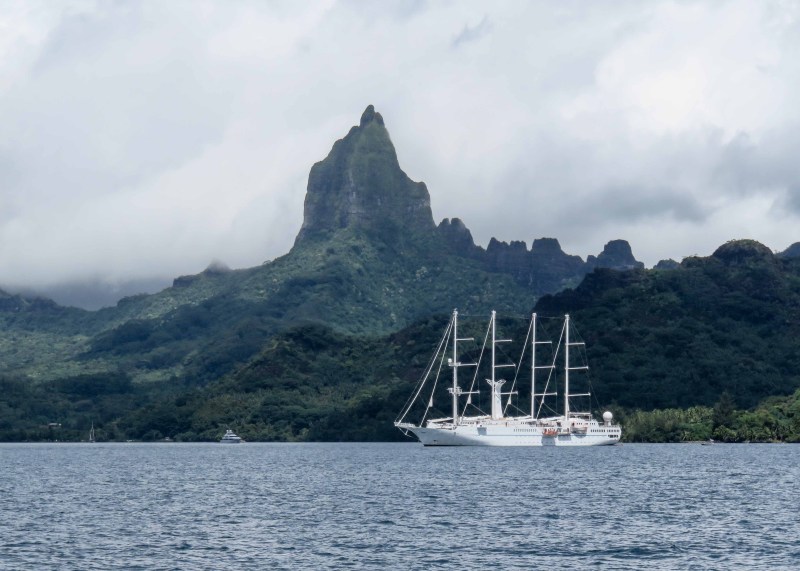 Oponohu Bay – Moorea. This is m/v “Wind Spirt” – a sort of sail-power cruise ship. You get the feel and the experience of the “days of sail”, but of course the sail is mostly for show. The landmark in the back ground is the famous “Sharks Tooth”, seen in many Hollywood films from “South Pacific” to “Mutiny on the Bounty”. Captain Bligh as well as Captain Cook actually did enter and anchor here. 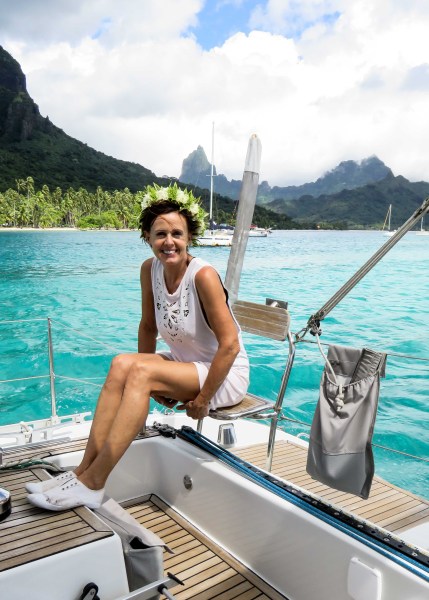 Tiare Nikki… Nikki loved the floral lei’s and head flowers known as “Tiare’s”,worn by many of the local women and enjoyed having the fresh flowers and floral scents around the boat any time.

Rainbow at Oponohu Bay.  This is the parallel and sister bay to “Cooks Bay” to our left.  Huge cruise ships can enter and anchor in these tow sister bays You really get the feel with this classic Swiss yacht of the olden days of life at sea under sail. A Byrd on a Wire!…. This classic sailing vessel was gaff rigged and had “ratlines” to go aloft. These allow the crew to inspect and repair gear as well as have a longer distance view of low lying reefs and atolls. The floral “Tiare” with many of the local flowers including the gardenias and frangipani. The smell was fabulous and would waft everywhere through the boat. “Wind Spirit” under full sail. Actually, I think the sails can add only about 1 knot of boat speed and quite a bit of stability to these hybrid cruise ships. They would be in Huahine after an over night passage We rented a car for the day island tour and were lucky enough to come upon this small boutique “pension” who allowed us to use their dinghy dock for the day. This is the classic “Belvedere” photo that everyone was lining up to take. I took many with Cindy here in 2009 and 2010…..Life’s memories. Oponohu Bay on the left (west) and Cooks Bay on the right (east). Despite the fact that “Cook’s Bay” is on the right, it was actually Oponohu Bay that Captain Cook anchored in. Both are easy entry and offer incredible protection for an anchored boat. We’re anchored to the left of the peak and behind it, inside the reef. At the foot of the “Belvedere” we got a close up look at some of the incredible geology of Moorea. There are experimental farms on Moorea and in the last 10 years or so, they’ve started growing pineapples. The islands of Tahiti, Moorea and especially the “Sous les Vents” (leewards) are renowned for their vanilla plantations. The Vanilla plants are completely enclosed in netted pens to keep certain pests away which would otherwise decimate the vines. We caught this dragonfly resting on the inside of one of the vanilla pens. This is a a gardenia which is the primary flower used in the “Tiare Tahiti’ floral crowns. This is the northwest side of the top of the island as seen from the top of “Magic Mountain”. Magic Mountain is a local view hike that takes about 45 minutes and is quite steep. We were pretty tired and of course, it’s hot!

The second largest town is below us and the Intercontinental Hotel is on the far left. The hotel is home to the stingray feeding (yes you can and it’s safe) and the boats anchored below are at the “underwater tiki garden”. This is an attraction only, not a true piece of archeology.  There are about 5-6 statures underwater that you can snorkel or dive around. Between the Bays.  Oponohu is below us and the entrance to Cooks Bay is in the distance. “Beach House” is third from the left. “Beach House” is the bottom right boat in this photo. We’re anchored in 8 feet of crystal clear water. One of the famous “overwater bungalow” style hotels is at the top. These are the most popular style hotels in the Tropical World. Many include a private entry into the ocean right in the middle of your room. Many have swim steps right off the patio. You choose Kiteboarding inside the reef. This expert went over 5 miles back and forth inside the reef with a spectacular view both above and below the water. The water is quite flat where he is and is protected by the outer reef above. He’s kiteboarding in less than 6 feet of water for the most part. Pretty cool, exciting and beautiful. This is one of the big inter island ferries heading back to Tahiti from the eastern bay. Pretty nice digs and a great anchoring spot All good things must end and we’re very behind our sort of schedule to reach Australia by mid December. Yeah, it sounds like it’s a long time and a long way off, but with 4500 miles to cover and lots of other places to visit, it was time for our boot heels to be wanderin’….Sunrise over Moorea en route to Huahine. Good Bye Moorea. We left at 05:45, first light to exit the reef. The trip was 80 miles and we wanted to be in Huahine before dark. En route to Huahine, this private jet (we assume?) took a liking to us and made several passes You get a feel for how low he was with our radio antenna in the foreground. Whale HO!  We saw a lone whale as we were half way down the island’s west side and right when we got to the widest part of the island, we saw this group of three humpback whales.  This was Nikki’s FIRST OFFICIAL Whale sighting. A Whale of a Tail……and you wouldn’t have believed it if you didn’t see it for yourself!  The main town of Fare is in the distance where we would anchor for two nights.  We UNFORTUNATELY discovered that one of our alternators “power take off” had broken off the starboard engine and we would end up short circuiting our time on Huahine which was a disappointment. We briefly made a few new friends including Steve and Leilee on s/v Leeward. He’s sort of a “Jimmy Buffet” gone wild kind a guy.

We covered the 25 miles to Raiatea two days later where we were for eight days, touring and yet again….getting our engines “fixed”.  We also repaired a small annoyance on our boom (which made Capt. Scott happy) and met up with old friends Pete and Sue Wolcott (s/v Kiapa Nui) and Eric and Leslie from (s/v Kandu).

We are currently in Bora Bora about to depart for the island of Suwarow in the Cook Islands tomorrow!  Suwarrow (pronounced ‘Suvorov” was made famous by self imposed castaway, Tom Neale who lived there alone from the mid 1950’s to 1976 when he passed away. He wrote a book about his adventures, “An Island to Oneself” which we will read on our projected 4 day sail to this very remote island.

We most likely will have to finish up our next main blog with photos from our time in Raiatea, Tahaa and Bora Bora when we next get internet in American Samoa within the next month!  After Suwarrow, we may try to enter the very remote and infrequently visited “Rose Atoll” en route to American Samoa.

We’ll keep you all up to date on the “Ship’s Mini Blogs and Position Reports” as we go on our way.

Feel free to drop us a note, love to hear from you all!