We left Portobelo in the rain and squalls for the short journey to the north entrance of the Panama Canal. As we were only 17 miles away, we started seeing AIS targets on our chart plotter immediately – eventually counting up to 99 large commercial vessels – mostly at anchor.
For those who don\’t recall, AIS is our automatic identification system which shows up vessels who have it on our chart plotter. It\’s much like a transponder in an airplane. All commercial vessels over a certain size are required to have this device. Small boats like us can have it voluntarily.

Note all the LARGE RED ICONS on the left screen. They\’re all the \”Heavy Metal\” we had to watch out for.  The Red graphics on the right are the numerous rain squalls that were upon us which we can see on our radar.  The X is the entrance, the line to it\’s left is the East Breakwater.

As we approached the fairly narrow entrance to the North side breakwater, we were in essentially rain/fog conditions. As such, I turned on our lights and sound signals for limited visibility. As soon as we entered the breakwater, we made a right turn and paralleled the wall till we came to Shelter Bay about 1/2 mile inside. There\’s a few reefs to avoid, but as you can imagine, the navigation aids here are in perfect shape. Shelter Bay was originally a U.S. Military base (Fort Sherman) during WW1 through the time the US turned the Canal Zone back over to the Panamanian Government in the late 1970\’s.

We wanted to make sure we were able to get a good slip at Shelter Bay Marina and to do so, we had to beat in the \”World ARC\”.
The World ARC is an 18 month, round the world rally which usually gets about 30-35 boats (to start) and invades anywhere they arrive.
This would be the third time I\’ll be lapped by the rally. The first time was in 2010, with Cindy in French Polynesia. Then Nikki and I met them in Cocos and Christmas Islands off the Northwest coast of Australia in the Indian Ocean in 2012. Here in 2016, would be the third time at Shelter Bay. To see more on the World ARC, click this link: World ARC Rally

We were lucky and got a slip right in the center of the action in front of the main facility and restaurant. The docks are in excellent shape, the electricity is good and we\’re able to run our air conditioning in the 90-95 degree heat! As many of you know who have been following us this season, Miss Piggy (aka: Beach House) has had quite a few things go awry. While here, we need to get both water makers up to speed (yet again), both engines will get new rings and bearings and too many little details to list. In fact, it got to be so much in terms of parts, that Nikki took a quick trip back to Florida for a week to pick up 140 pounds worth of boat parts and take care of lots of little things for us back in the US. Mike and Beth would still be bringing another entire suit case when they arrive in March.

We met with Greg Van Wyck, a Canadian ex-pat and retired Aircraft Mechanic/Engineer. Greg goes by \”The Engine Whisperer\” and it is a well deserved moniker. He has literally taken both our engines apart and is changing the rings and bearings. Apparently, I babied the engines a bit too much and used synthetic oil on them too soon. As such, the rings never \”broke in\” and we\’ve been getting unburned fuel and some oil burning (blow by). When Greg took the engines apart, he said they looked brand new and told me that for the next 500 hours I\’m to use standard 15W-40 diesel engine oil. Duly noted….:-)

Our generator was also \”dead\”. Turns out we had three separate issues, none to do with the engine itself. Two broken cables, a bad exhaust temperature probe and some capacitor issues which effected our voltage.

On my birthday, January 25th, Nikki took me to Panama City for a few days. We went via the Panama Canal Railway which more or less parallels the canal. The ride was a little over an hour from Colon, but it takes that long to get into town as most trips require us to wait for the ships to enter or exit the locks. We then drive over a lowered bridge. The wait is typically 20 minutes to an hour. The traffic is backed up for a mile as here, ships have the right of way!  The canal operates 24/7/365 and takes in 5 million US Dollars per day. Nice if you can get the work.
We\’d up spending 7 very busy weeks on this side of the Canal and have made a \”recky\” into Panama City as well.

Ah, it rolls around again. This would be number 62 for me. Nikki made a great Cheesecake (my favorite). YUM!

As we write, it\’s now the 3rd week of February and we\’re awaiting friends Mike and Beth Lonnes who will be here within the next few weeks to transit the canal. If it all works out well, I\’ll be able to email everyone the approximate time and weblink to the Miraflores Locks and for those of you with an interest, can watch us in real time transit the canal sometime between on the 8th of March. We\’ll definitely update you for that event. In addition, if you\’ve a keen interest in the building of the Panama Canal and it\’s history, check out this book, \”Path Between the Seas\” by David McCullough – click Amazon link here: \”The Path Between the Seas\” by David McCullough

I leave you with some shots of the Panama Canal in action! 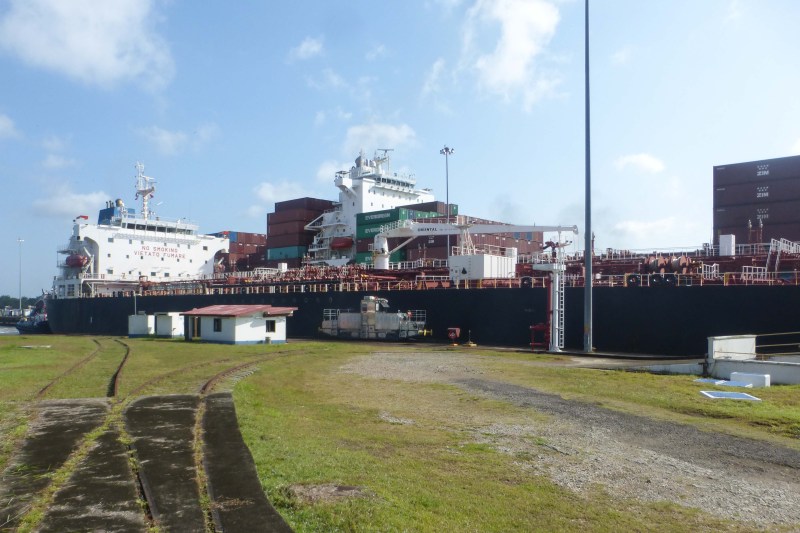 For my birthday, Nikki took me on the train to Panama City for the weekend and we got a tasty tour of what was to come.  The difference between the two sides of the canal is as different as the two seas!  The Pacific side is much more metropolitan and looks like a mini Miami Beach.

I leave you with a photo of the modern Panama City and we\’ll tell you all about it in a future Ship\’s Blog.

Our friends Mike and Beth Lonnes are \”in country\” and will be here on the 5th of March. We\’ll be doing the \”Pacific Puddle Jump Party\” on the 6th and transit the canal to the Pacific Ocean on the 7th of March into Gatun Lake through the Gatun Locks. We\’ll stay the night and finish our transit on the 8th of March going through in quick succession; the Pedro Miguel and finally Miraflores Locks.  We hope to \”live blog\” while going through the canal and when we get to the final Miraflores Locks, let all who are interested link in to see us as we transit to the Pacific Ocean for the first time in 4 years on the LIVE WEBCAM….. We\’ll send a web post out trying to give you as solid a time as we can when we make the jump.

Stand by and KIT,
Scott and Nikki – Shelter Bay Marina, North(Caribbean)side of the Panama Canal.